Afghanistan Microfinance Association (AMA) is the national network of Development Finance Institutions (DFIs) in Afghanistan. It was established in 2005 by the Microfinance Investment Support Facility for Afghanistan (MISFA), microfinance practitioners, and other stakeholders. AMA was registered with the Ministry of Justice of Afghanistan in 2007. Due to limited resources and activities, AMA was not very active until 2010 and was almost a dormant organization.
With support from USAID’s Financial Access for Investing in the Development of Afghanistan (FAIDA) project, and the continued backing of MISFA, AMA positioned itself as an association that promotes the broader development finance sector in Afghanistan.
AMA is one of the founding members of the South Asian Micro-entrepreneur Network (SAMN) and has been an active member since 2009. Currently, AMA serves as Vice Chairman of the Board of Directors of SAMN. In 2012, AMA also became a member of the Social Enterprise and Education Promotion (SEEP) Network.

To promote financial inclusion through creation of an enabling environment for the development finance sector in Afghanistan.

As an independent legal entity, AMA is governed by a Board of Directors. The General Assembly, constituted with the participation of a representative from each member, is the highest decision making body. The Board of Directors is composed of five members drawn from a diverse field of experiences such as development finance, management, and economics, among others. The General Assembly meets at least once a year, while the Board meets once every quarter, reviews the quarterly progress, advises the management on day-to-day operations, and takes collective decisions accordingly. There are also a number of need-based Working Groups and Sub-Committees formed for specific purposes, for example, Finance and Audit, Advocacy and Fund Raising Committees. In 2015, AMA organized a General Assembly and five Board of Directors meetings.

AMA has adopted a decentralized organizational structure with separate Board and Management team responsibilities. Day-to-day management of AMA is carried out by the senior management team headed by the Executive Director (ED).
The ED leads the organization with support from three Managers: Member Services, Research and Communication, Finance and Admin at Head Office, and four Regional Coordinators. 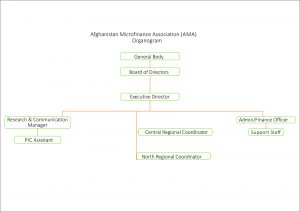